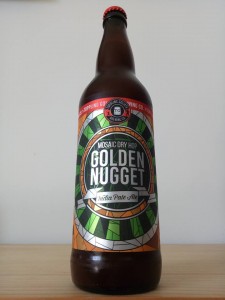 “The combination of golden promise malt, Mosaic, and Nugget hops make this IPA a bouquet of hop, citrus, and pineapple aromas, followed by floral sweetness. a bold, hop-forward taste captivates the senses and leaves behind a pleasant bitterness.”

Appearance: Super cloudy golden/mustard yellow. It constructs a big three finger head that persists with a smattering lace all over the glass.

Aroma: It showcases the magnificent mosaic hop really well. Tonnes of pineapple, peach, lychee and pear. Super juicy with solid creamy and stonefruit characters……literally brekky juice! Some mild citrus undertones, a touch of spice and some botanicals thrown in for good measure!

Flavour: So juicy. It actually tastes like a fruit salad. I mean pineapple, rockmelon, pear, orange, lychee, grapefruit, peach, guava and banana are all here. Creamy and somewhat musty notes in the back seat. Smooth and fruity through the mid then finishing on a slightly bitter note with hints of grapefruit and grassy hop character on the rear.

Mouthfeel: Creamy texture with a bit of drying bitterness late in the piece. Medium body with a well masked 60 IBU and 6.8% ABV.

Overall: Hard to fault it really, it’s a damn fine NEIPA. One of those beers where you wished you had another 12 in the fridge. Sadly we don’t as we muled this back from the USA. Top notch.