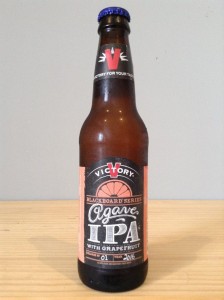 “Victory is excited to introduce a BRAND New series in adventurous and unique beers –the Blackboard Series. Combining our award winning brewing techniques along side the deliciously fresh ingredients we are known for, we bring you four new rotating “special” brews available on draft, with two of them also available in bottles throughout our distribution footprint. We invite you to taste what our brewers are cooking up!”

Served in an IPA glass. She pours a bright golden glow with decent clarity on offer. A short, compacted head is generated but it quickly peels back to a thin sheet with scarce lacing. The nose is nice and fruity but albeit restrained. As expected grapefruit notes lead out with hints of pineapple, orange peel, spice and a certain herbaceous character in support. The use of pilsner & Cara malts not only give it this lovely golden hue but also a subtle grainy backing along with a light honey sweetness. Do we get much agave? Not at all, and frankly it needed it as there really isn’t a lot happening on the nose. The mouth feel is a little slippery with quite a thin texture. The body is mild and Co2 is moderate with a muted bitterness developing mid way. It drinks like a bloody summer ale, what is this? Very mild citric bite on the front palate. Just enough sweet and grainy malt carries the soft bitterness through the mid. Eventually a soft herbal bite which could be the agave in disguise, forms late leading in to a dry finish with suggestions of orange peel on the rear. We just have to come straight out and say we’re a little disappointed by the lack of character in this IPA. Both feature flavours don’t present half as well as they could and the delicate body reminds us of a low strength pale ale or a summer ale. On the other hand though, great masking of the 7% ABV along with super session ability but it’s just lacking in depth and all round pizzazz. We’ve had much better from this top shelf American brewery.