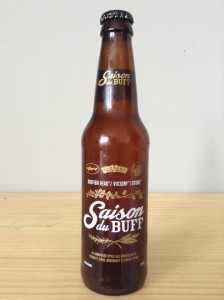 “This saison has been infused with a herbaceous blend of Stone Farms and locally harvested sage, lemon thyme, rosemary and parsley and dry-hopped with Citra hops for a refreshing finish. First brewed in 2010, this citrusy farmhouse ale was named Saison du BUFF in tribute to the ad hoc coalition that Sam (Dogfish Head), Bill (Victory) and Greg (Stone) formed in 2003. Called Brewers United for Freedom of Flavor (BUFF), it was their way to show the beer industry that they were banding together to make room on the shelf for craft beer. Six years later this farm-to-kettle beer still boasts the use of freshly picked local herbs as well as Citra and Centennial hops to infuse crisp, savory, mouthwatering flavors.”

Served in a wide rimmed tulip. The hazy amber pour knocks up a modest finger of loosely held foam. The head doesn’t take long to collapse as it settles to a thick ring with minimal lacing. The aroma smells really fresh and herbal with subtle lashes of citrus peel and lemon cutting through. The bottle shows parsley, sage, rosemary and lemon thyme as additional ingredients in the brew and we tell you what, they certainly shine through. Only a very delicate dry barnyard-like character to it. Acidity is mild and the bretty funk that is often a trait of Saisons is also pretty restrained. Not a lot going on really. Just a crisp, herbal and refreshing aroma. The texture in the mouth is fizzy and mineraly with vigorous Co2. The 52 IBU provides a healthy bitterness while the 6.8% ABV is masked nicely. Drinks well and keeps with the light, crisp character of the beer. From the first sip through to the finish the fresh herbs and crisp bitterness would have to be the dominant flavours. Hints of spice and lemon develop late in the mid as it leads in to the dry and herbaceous finish with good duration on the back palate. We must admit when we saw that three of America’s best breweries collaborated on a Saison we almost wet ourselves. The unfortunate thing is it’s just not that exciting. It’s a little one-dimensional and at times could be mistaken for a Witbier. The herbs have been used well but that’s about it. Nice and light, crisp and highly palatable but when it comes down to it, it’s just your run of the mill Saison.