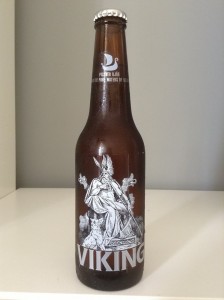 This is a gamble buy here but what made it an easy choice was the cheap price. We’ve picked it up from Dan Murphy’s and it comes across as a bit of a cheap brew but we’re never ones to write off a beer on appearance. (Unless we’re looking at a VB or a Tooheys of course).

Served in to a flute glass the appearance offers a clear-as-day straw golden body with a foamy 1 finger head that diminishes quite quickly to a few floating patches of foam on top. Laced poorly. The aroma is a tad funky. Wet cardboard is a bad sign as this usually means the beer was either exposed to oxygen or high temperatures. There was a touch of lemony citrus and hints of spicy Saaz or Noble hops and grainy/biscuity malts but that’s about it. Very substandard aroma. Medium carbonation on the tongue and light bodied with a watery mouth feel. A touch of bitterness on the tongue carries delicate hints of lemon through the mid as a restrained honey sweetness and grainy malts finish weak and watery. Kind of drops out on the back end. The 4.4% ABV is just like the beer….. average at best. Einstök is the only other Icelandic beer we have tried and it wasn’t too dissimilar to this, although the Einstök was much better. Lucky this one was cheap. Won’t buy again.