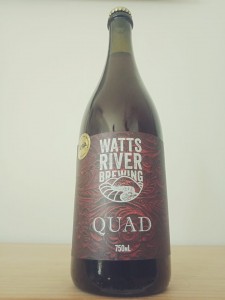 “Big. Rich. Complex. Warming. Comforting. A showcase of our own malted barley devoured by bold Belgian yeast. Inspired the Trappist “Quadrupel” style to be big, but above all else balanced and drinkable. Best served to share.”

Aroma: Super sweet! Almost cloying. We pick up a bit of acetone initially but it fades in to those Belgian yeasty phenols and spice, pear, candied sugars, toffee, caramel and dark fruits. There’s a really overpowering artificial sweetness going on – it brings on those banana runts and hints of boiled lollies and blackcurrant juice. Not too bad once it settles actually.

Flavour: Unfortunately we get that harsh boozy acetone character upfront moving into artificially sweet candied sugars and toffee apple, caramel, yeasty phenols/spice and brandy. We detect a bit of tang which reminds us of red currants and banana runts to finish.

Mouthfeel: Thin, watery texture. Has a touch of stickiness on the lips. Its 11% AbV and it certainly is discernible. We lose the flavour and carbonation as we near the end..like a liqueur. This is the point where it almost becomes a chore to finish it off, which is a real shame.

Overall: Slightly disappointing to be honest. We’ll concede that it’s a tough style to brew but we wanted more body, more depth of flavour and less artificial sweetness. We’ve had better.