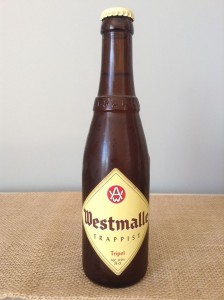 In one of our recent reviews of a Trappist beer we revealed our plight to review, at least, one beer from every brewery that is brilliant enough to own the Trappist label. This Tripel from Westmalle is one of those beers which we can’t honestly explain why it’s taken us so long to review as it’s a beer, that until now, was constantly overlooked. Cool bottle too, this distinctive ring that protrudes around the neck is very unique and we must admit, something we’ve never seen on any other bottle. OK, on with the review.

We served in to a snifter glass. The cloudy light golden pour arouses a bubbly one and a half finger head which peels off a cm before resting to a thin, foamy covering over the top. Laced well, shedding some thick, soapy residue as we imbibe. The nose is quite conservative for a Belgian Tripel of its strength (9.5% ABV) not as sweet as most of its counterparts as this certain savoury caramel fudge-like feature Is detected initially. A certain candi sugary sweetness is there but it’s held back by wafts of dough, lemonade, herbs, banana, clove, pear, alcohol and white pepper. Still quite traditional…and essentially a very nice aroma. In the mouth it’s quite sharp with the alcohol burn really piercing the tongue. Quite a nice and smooth texture which does help to balance out the ABV. Mild-moderate carbonation. Certainly on the fuller side, really taking its time as it grips on its way down. Sweetness is prevalent upfront, amplified by a firm alcohol presence and citric fruit esters. Some candi sugar develops late as the mid displays some spicy and floral notes that lead on to a herbaceous finish that offers lingering hints of coriander and lemongrass to round it all off. Impressive. Another top shelf brew that can easily be added to the list of benchmark Belgian Tripels. It’s not like the authentic Trappist label is awarded willy nilly, beers of this quality gain the label, and this one definitely deserves it. Classy stuff.