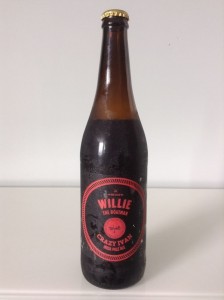 A funny IPA this one…without stating the obvious we are a couple of hop fiends and wherever we go we usually walk away from a brewery saying that “the IPA was the best beer”. Not so much in this case, but it would be totally wrong to write off the beer before consumption so let’s move on.

Served in an IPA glass the deep tawny pour generates a healthy 2 finger tanned head that eventually shrunk to a firm covering on top. Laced well. Yes, it’s fruity on the nose but not as you’d expect. Fruits that west coast hops produce such as grapefruit, lychee and mango are subbed for much darker, juicier fruits like plum, blackberry and passion fruit. There is a firm nutty malt presence in here too with rich toffee, fudge, maple syrup and palm sugar coming forward. In the mouth it’s well rounded with an oily texture while the carbonation and body are both medium. The palate follows on from the aroma with this sweet, juicy splash of dark berries and caramelised sugars. A welcome hop bitterness bridges the mid as a mild nuttiness moves forward and rounds off with a dry, fruity finish. Length is OK. 6% ABV. It is a very different IPA and it’s hard to categorise it as it doesn’t fit in either the American or the English IPA family. If anything it’s more of a hoppy amber ale than an anything else. We love this brewery but this beer is a little confusing and we feel this one needs a bit of work.