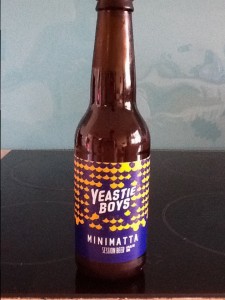 “A sessionable earl grey pale ale, inspired by the common complaint from Gunnamatta drinkers. “I just wish i could find some way of drinking more of the stuff.” We slashed the booze, halved the tea and doubled the puns to create a perfect sessionable balance. Heirloom orange and floral notes entice you in on the nose, and a re followed by a clean malt profile carrying a hint of tropical fruit, before giving way to the fresh hop finish and lengthy floral tea notes on the palate.”

From the lads in Invercargill, NZ comes the little brother of the Gunnamatta brew. This drop used earl grey tea leaves in abundance and was a real hit. This beer uses half the tea , hops, and less booze. Basically this is the half brother. The use of Motueka, Sauvin and Wakatu hops gives a mixture of flavours like white wine, floral citrus fruit such as orange and lime. Being a pale ale, the body is golden, light copper. Pours a small head which fades quickly to leave a patchy rim on the tulip glass. The mouth feel is mildly carbonated. Moderate bitterness on the palate here. There is a drying effect that lingers. We can certainly taste the Sauvin hops here..that white wine-like taste is present. The hops and the caramel malt is well mixed here and form a balanced, smooth ale that is sessionable as it’s alc vol is 4%. We must admit, we don’t get a lot of the tea flavour here though. We wish these low alcohol beers were more readily available. They piss all over xxxx and other crap sold at commercial bars, festivals or the races etc. We like this beer but we think the gunnamatta is better.