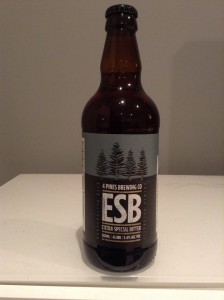 Quite an easily found beer this one, we picked it up from Dan Murphy’s, but as any craft brew, it’s better on tap at the brewery. This ESB actually won a couple of awards back when it was first brewed in 2010 and then picking up a couple of golds recently.

Served in a pint glass the translucent amber/ruby red pour generates a beige 1 finger head that recedes to a half-crest of bubbles on top. Standard lacing. What emanates out of the glass initially is a rich and sticky toffee and nutty sweetness that’s followed by a firm earthiness. In the background are some muted grassy English hops (Williamette, Kent golding and Fuggles) that provide a mild balance. In the mouth it’s full and chewy with decent carbonation. The flavour seems to follow on from the aroma with the addition of a mildly assertive bitterness (45 IBU) that cuts through the solid burst of sweet toffee malts and subtle Jaffa upfront. The mid offers nuts and a touch of spicy hops while the finish slightly drops off with a short and mild bitterness. Disappointing end to a good ESB, but the 5.4% ABV does pick it up with a little warming on rear palate. Good beer, we aren’t really fond of bitters but this is pretty drinkable. Decent offering.