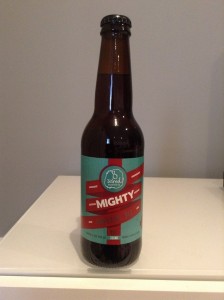 “My idea of a strong ale was brewed with loads of malt, hops, jaggery and a touch of manuka smoke. It was fermented with a clean ale yeast to let the ingredients speak for themselves without getting interrupted by too many esters. After all that it was aged for 5 months on American oak, then refermented in the bottle”.

This brewery just simply refuses to brew an average beer….and we love it!! This one is an immensely strong, oak aged American ale which is brewed with Manuka smoke, jaggery (raw sugar) and aged on American oak. Woah. Served in a beer tulip, the tawny brown pour struggled to construct it’s minimal tan head that swells to about a fingers height before slowly reducing to patches of foam on top. Minimal lacing. As to be expected from this world class brewery a very unique, yet brilliantly complex aroma consisting of burned wood, dark fruits, fortified wine, aniseed, palm sugar, vanilla, smoke and a touch of alcohol comes forward. The mouth feel is silky with mild-medium carbonation. Fuller bodied. Quite woody, the oak really gives the texture a thick viscosity. Upfront the palate is dominated by the warming alcohol content (11% ABV) while the mid develops unique and earthy flavours such as port, vanilla oak and caramel. The finish is long and well drawn out offering a lot of smoked and peaty notes. Wow this is a very complicated beer, insanely strong and extra points for originality and its individual style. Great beer.