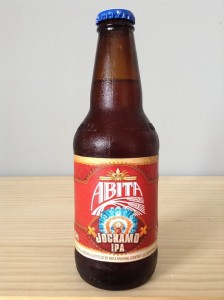 “Abita Jockamo IPA® is an American IPA brewed with pale, red, and caramel malts. This copper-colored ale is liberally hopped and dry hopped with Willamette and Columbus hops. The flavor is bold like the “Mardi Gras Indians” who march through New Orleans in suits of feathers and beads.Jockamo has a flavor that entices and excites the palate. The intense hop character adds more spice to the meal and makes it a perfect choice to team up with many spicy dishes. Cheddar and strong farmer cheeses stand up well to Jockamo’s hoppy character. Jockamo goes well with wild game, grilled meats and Thai or Mexican cuisine.”

Served in an IPA glass. Pours to a deep amber hue with an attractive copper tint. A two finger crown is formed over the top but it gradually peels off and settles to a fine film with reasonable lace trailing it down. The hallmark IPA scents of tropical fruit and citrus take a back seat in this heavily malt-forward aroma. Big presence of caramel, toffee and honey but it’s brilliantly infused with floral lavender and pine. Quite sweet too, juicy wafts of blackcurrant or boysenberry are a delight to take in. Hints of mango and pineapple do come out but it’s the malts and florals that steal the show. In the mouth it’s smooth and creamy in texture. A mild 52 IBU and a moderate 6.5% ABV adds to the slick feel of this IPA. Those dominant malts we got on the nose transfer on to the palate as the subtle hops and tropical fruits are washed over by caramelized malts and honey. As it all progresses through the mid a mildly assertive hop bitterness cuts through the floral tones and leads on to a slightly dry and malty finish. If you’re a hop head and you’re a after a big, saliva-sapping IPA then this one isn’t what you’re after. On the flip side though, if you’re after a more palate-friendly and sessional IPA then it is. For us, it was delicious but a little too passive. No points lost though, it’s still a decent IPA.