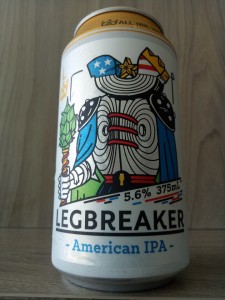 “Legbreaker takes to the field as a determined all-rounder, striking a well-practiced balance between sweet, malt biscuit flavour and the bitter hoppy wallops of generous doses of American Columbus, Centennial and Citra. Stand by for lashings of grapefruit, floral, and resinous characters.”

Appearance: Slightly hazy amber. The pour generates a frothy two finger crown that persists. Tonnes of lace is clinging to the glass as we hook in.

Flavour: Certainly kept with the resinous character. Slightly earthy on the front end though. Nice little grapefruit acidity with some tangy orange sweetness midway. It rolls in to a dry and bitter finish with spice and pine resins going the distance on the back palate.

Overall: It kind of straddles that line between American pale ale and IPA. It would have to be a pretty big APA but then again it’s not really big enough to be an IPA. Confused yet?! Anywho, it’s good without being great.