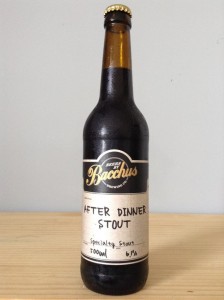 Served in a beer tulip. This stout pours a jet black complexion that builds a two finger head before it retracts to a halo with some scattered patches of lace left in its wake.
It’s no longer a secret that Bacchus are now the kings of dessert beers and as our glass sits there, a fair distance from our noses, we still get a strong waft of peppermint. The precision here is incredible, it literally smells like a mint pattie. This brilliant balance between creamy peppermint and earthy chocolate is divine and so indulgent. Impressive stuff.
The texture is interesting….much to our surprise it’s light on and slightly more carbonated than expected. She’s surprisingly smooth and easy down the gullet with a clean and refreshing menthol feel that hangs about for a while.
The flavour continues on from the aroma – a delicious minty freshness with a light but indulgent chocolate character in support. Not a great deal of transition as the dominant mint and chocolate carry through the mid and in to the finish.
These dessert beers are absolutely delicious but they can run the risk of being a bit too one dimensional and predictable. We know we’re kind of nitpicking here so we’ll finish by saying that Bacchus have brewed another tasty dessert beer…..but it doesn’t top the sex, drugs and rocky road though