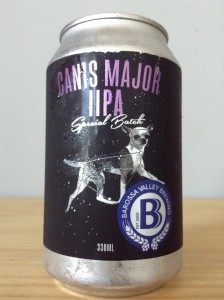 “Inspired by the ‘great dog’ star-system this Imperial IPA is a flavour supernova. With over 100 IBU’s of hop, partnered with ample malts to give it balance, there’s no wonder it was judged to be a pedigree, winning both Champion IPA and Best Beer In Show at the Adelaide Beer Awards.”

Served in an IPA glass. She pours a deep rusted amber hue with a finger of frothy head the collapsed to a filmy overlay. A consistent set of rings is left as we imbibe.
The aroma is big but in saying that it’s still quite restrained in comparison to other Australian imperial IPA’s. We’ll go out on a limb and say an all-Aussie hop bill makes it up which gives it less impact and a much more floral, candied and peachy aroma. A pretty robust caramel malt brings up the bottom end. Overall, pretty well balanced for an IIPA.
Quite dense and chewy in the mouth. The 102 IBU is obviously felt but it doesn’t overpower. A bit of warmth from the 8% ABV but it’s trimmed and fits in well with the medium-full body.
We’re not getting a whole lot of flavour upfront. The chewy caramel malts present well but it’s lacking in that crucial hop flavour. Standard middle – sharp, pincing alcohol teams up with the bittering hops and leads to a super bitter and slightly burnt finish.
There’s a few things not quite right with this beer. It may not be fresh which would explain the lack of snappy hops but the main issue, and don’t get cranky at us here, we think that any imperial IPA has to be dry or late hopped with one of the big high alpha American ‘C’ hops. Again, it could be a question of freshness but this was pretty average.