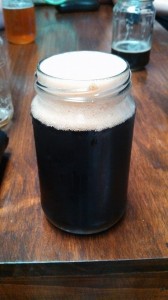 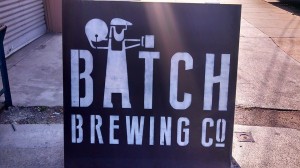 Just a few minutes walk from Sydenham train station sits this industrial, but highly trendy brewery. With an ever-changing pop up food stall at the front we were met with very vintage/minimalist furniture such as stacked up pallets with rough planks of wood thrown on top as tables and milk crates as chairs. Really cool, we liked it. The beer selection was good, there were bearded fella’s pouring a rye pale ale, an APA, an IPA, a coconut brown ale, a hopped out brown ale and a milk stout. One other thing got us talking too, it was the idea of serving beer in jars. Very trendy but not all practical, but still a good idea. The only downside (Not for us but for my misses) was that there weren’t any non-beer options, so fella’s if you’re taking your girl make sure she’s a beer drinker or you might end up in the doghouse. Just saying 🙂