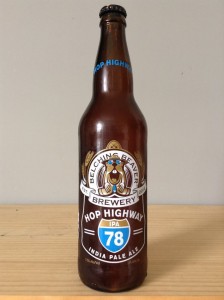 “Named after California’s Highway 78, this India Pale Ale was brewed in commemoration of the 50th Anniversary of the city of Vista. With plenty of Galaxy, Falconer’s Flight, Southern Cross and just a tad bit of Nelson hops, our latest IPA is truly sessionable. Aroma’s include grapefruit, passionfruit, and citrus.”

Served in an IPA glass. Super hazy amber pour with a gushing four finger head forming over the top. As it recedes it weaves a thick, webbed lace trail down the walls of the glass. Looks delish! Interesting aroma, just as we were about to say that it smells like an Aussie IPA we noticed the feature hop in this brew is our very own Galaxy hop. We’re definitely getting a lot of stone fruits coming through, hinting at peach, rock melon and nectarine mainly with lemon citrus notes pushing up in support. Certainly has a distinct tang to it. The malt profile is bold but a little muddled, earthy if anything. Maybe suggestions of biscuits creeping in. Not sure if we’re completely sold on the aroma. The mouth feel is surprisingly light on. The body is mild-medium with a gentle bitterness in the mid. 7.3% ABV – also well contained. Loving the session ability but the texture seems a bit too delicate for an IPA of its size. The flavour seems to be a little lacklustre as well. Upfront it’s all a little mixed up between peach, pineapple and a strange malty tang. The mild bitterness carries citrus notes through the mid and lands on a soft, fruity finish which unfortunately pulls up a bit short on the rear palate. We’d be lying if we didn’t say we’re disappointed. It could even be a case of the beer not being fresh but it just seems flat, tedious and uninteresting. A far cry from the peanut butter milk stout which was excellent. Definitely not worth the $20 odd price tag. Won’t be returning.