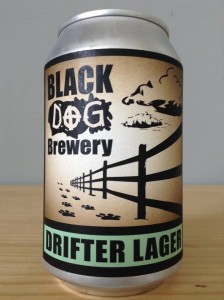 “Drifter is a new world lager based on a German pilsner. This brew has combined pilsner, ale, carapils malt along with a touch of malted wheat and hopped with Aussie Enigma and Topaz grown by HPA. Our Macca was a drifter, roaming the neighbouring farms to stop in and say hello to his fellow canine compadre’s often spotted running along the fence lines. Drifter AKA Macca the Black Dog legend will live on.”

Served in a shaker glass. Pouring a bright and relatively clear amber hue with a stubby finger of off white foam over the top. The head eventually recedes and establishes a thin film with surprisingly healthy lace trails on the glass. Although the aroma is mainly a malty affair, Aussie Enigma and Topaz hops adds zippy citrus overtones while a kind of boiled candy sweetness is offered in support. The malt profile on the other hand provides a mix of honey, biscuits and rice crackers with a subtle earthy/floral pot pourri character. Very laid back and approachable on the nose. As expected the body is light on, a little watery but punctuated with a mild bitterness in the swallow. Definitely a summer session beer. The flavour pretty much follows on from the nose – we get light citrus and stone fruit notes hinged on a base of honey-forward pilsner malts. Subtle grainy and or hay accents do come through as it rounds out with a delicate bitterness along with a grassy/herbal hop note on the back palate. Well one thing is for sure, it’s a very simple beer. At only 4.7% ABV it would be one to reach for if you were attending an all day event where you want to knock a few back but don’t want to be so trolleyed that you end up hitting on your best mates misses. No one wants that! Not bad.