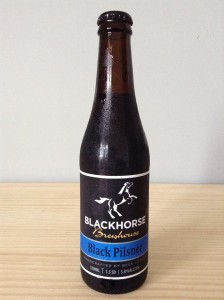 It’s quite ironic that the only two black Pilsner’s we’ve ever tried were either at the Blackhorse Brew house or by the Blackhorse Brew house. Second only to the Doctors Orders ‘Iron Lung’ when they had tapped it at the brew house just over a year ago. We must admit we do like where the brewery is heading under the guise of new head brewer, Gerard Meares. We’ll just keep patiently waiting for an IPA though! 🙂

Served in a flute glass. The deep cola appearance reveals a dash of mahogany on the edges when held up to the light. A short khaki head is formed before it rapidly dissipates to a halo with scarce lacing being omitted. The aroma certainly projects from the roasted side. A lovely dark, fruity sweetness offers up wafts of plum and sultana that work nicely in to the chocolate and roasted malts. Not a great deal of Pilsner character is coming through though, maybe just a faint suggestion of rubber and minerals but that’s about it. Nothing overly exciting. In the mouth it’s oily with a light, greasy texture. The malts do offer a little weight but it’s a little too thin overall. The 5.8% ABV provides the surprise factor though. Very well hidden. Upfront we’re getting a combination of grassy hops, herbs and toasted bready malts. A kind of plastic-y malt sweetness bridges the mid and eventually we taste some of those lovely charred and bitter flavours in the finish. This is a strange one. We honestly don’t know if we like it or not. There’s definitely some lovely roasted notes flowing through but the crisp, Pilsner character is a tad restrained. Maybe we’re a little inexperienced when it comes to black Pilsners. Either way it wasn’t too bad we just weren’t entirely impressed.