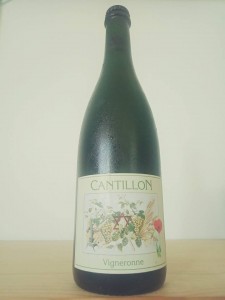 “Blend of lambics aged on average 16 to 18 months and of Muscat grapes. Muscat grapes make Vigneronne a delicate and very refreshing beer that, due to the fructose, is slightly less acidic than other Cantillon beers.”

Appearance: Hazy golden orange complexion. It forms a short head which quickly retreats to the rim. Some patchy lace as we indulge.

Aroma: One word…brilliant. we love how they’ve blurred the lines between beer and wine here. On one hand it’s like a slightly dry Moscato then the punchy lemon, oak and apricot arrives. Just a hint of white vinegar, barnyard funk and a bit of that manky old dirty sock character. So wrong yet so right!

Flavour: Very interesting. Certainly isn’t as sour as the rest of their range. There’s a quick cameo of acetic lemon and lacto funk initially but it’s quickly enveloped by freshly squeezed white grape juice, pear/apple and dry musty farmyard grain/spices. Lots of adjunct flavours on the palate as it finishes crisp and light with a mild lingering tartness.

Overall: These guys are just simply in tune with what they’re brewing and the six-pointed star on the strip confirms it. They describe each point of the star as a representation of the brewing process – fire (mash tun), earth (cereals), air (yeasts) and water. They just friggen love what they do which makes them so easy to love back!