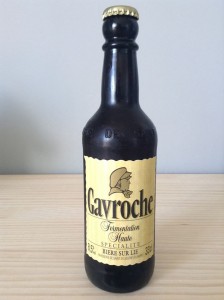 “Gavroche is a character in Victor Hugo’s 19th century novel, “Les Misérables”_ a rebellious yet always generous little urchin, living by his wits on the streets of Paris.
Gavroche is a strong, red beer, in which the deep malt flavour and brisk hoppiness are very well balanced ; and the whole is gracefully accentuated by fruity flavours derived from a special top-fermenting yeast. This is a rare French example an ale refermented in the bottle.
Gavroche must be served with care (leaving behind the fine yeast sediment) at about 10°C.”
Served in to a beer tulip. It’s pouring a hazy copper hue with a mountainous three finger head which gradually deconstructs but maintains a good centimeter layer over the top. Solid head retention here, weaving artistic lace trails as it ebbs. The initial aromas we detect are malty and sweet. Kind of like a strong English ale with it’s toffee and ripened fruit overtones with bready malts flowing through. We get a subtle tangy character as well, a little citric with a hint of pear-flavoured cider. May be a suggestion of fresh herbs too..sage and vines. A very pleasant and slightly complex aroma. In the mouth it’s certainly lighter than we were expecting. A little oily in texture. The 8.5% ABV is evident but not in an aggressive way, just there to remind you it isn’t a weak beer. Lively carbonation lends the feel some vibrance that gives the tongue a nice old tickle. The flavour takes on a very different angle. Whilst the aroma was more malt and fruit forward, the front palate is all about sharp phenols and yeasty spice. A nice warmth from the booze backs it up and bridges the mid and discreetly converts in to as Kriek-like cherry funkiness. Rounds out with a slightly dry, slightly earthy finish. Surprisingly complex but overall it has a kind of light-ish feel to it. This is only our 2nd ever crack at a Biere de Garde and we’re really liking the style so far. Strange yet highly palatable.