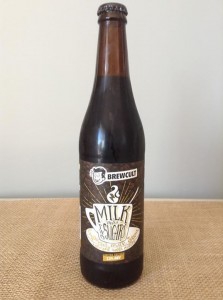 “Who doesn’t say “where’s my damn coffee!” every morning? But then again, you may also want a beer. Now you can have both! This is a smooth Imperial milk stout blended with espresso and cold steep coffee from our awesome friends at Axil Coffee Roasters”.

Well, one thing is for certain, if we were drinking a coffee with these guys we’d be saying “I’ll have the same thanks.” That is obviously a pipe dream so we’ll focus on the fact that when we first tried this stout at the 2015 GABS festival in Sydney we scored it the 2nd best beer of the whole day. 2nd to the one and only ‘Brutus’ by Murray’s. Anyhow, we’re here to talk about this brew…not Murray’s! Served in a beer tulip. The opaque black pour whips up a quickly disappearing dark brown head, leaving no lacing whatsoever. None of that really matters, though, once the olfactory’s are treated to a whiff of this brilliant aroma. Instantly we’re reminded of Founders’ breakfast stout with these big, roasted overtones of fresh espresso, coffee beans, dark chocolate, cocoa, vanilla, lactose, roasted malts and brown sugar. Magnificent! In the mouth it’s dense and heavy with an oily texture. Co2 levels are expectedly mild with a 7.2% ABV that’s incredibly well hidden. Hardly any hop bitterness at all. We’ve had beers that taste like coffee and we’ve had stouts that imitate coffee brilliantly, but this one here is like all of them put together! I personally love a short black and the fore-flavour of this beer portrays it down to a tee. A lovely sweet milkiness is then followed by a rich roasted bitterness that displays a kind of molasses-like viscosity. The one and only downside is the mid which slightly drops out but is instantly saved by a big, punchy and heavily roasted espresso bitterness which returns in the finish to round it all off. Exceptional length too, the delicious espresso roastiness really draws out well on to the rear palate and further. Wow! This stout was a huge talking point on the day of the GABS festival and it still is now. What a perfectly brewed beer, these guys have absolutely smashed this for six. This will certainly go down as one of the best coffee stouts we’ve ever drunk. Thank you Brew Cult!