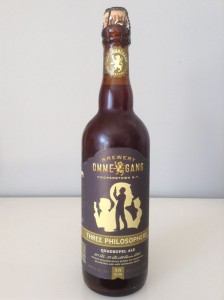 Fresh off our review of their brilliant Dubbel, we thought we’d have a crack at their Quad. It was only after we bought the Dubbel that we learned that this brewery is, as the bottle states, “part of the Duvel family of fine Belgian ales.” So, really, how can you go wrong? Exactly the same type of bottle as the Dubbel – 750ml with a cage and cork – which we hastily disposed of. As it was a bit of a gusher we carefully poured, expecting a mountainous head to ensue….but we were dead wrong. The mahogany pour reveals a bright red hue but she looks as flat as a tack. Whatever head which had formed upon the pour disappeared before we could even put the bottle down. Visually appealing? Not so much. Off the nose we’re getting plenty of dark, tangy fruits such as cherry, plum and blood orange. The orange component certainly has a slight Cointreau-like astringency to it as it offers a stinging effect on the olfactory’s. Maybe a touch too medicinal for our liking though, the artificial aromas of cherry and raspberry kind of remind us of our younger years when our Mum used to force us to drink Dimetapp when we had the flu. A very subtle suggestion of chocolate/cocoa pulls the fruits back but it’s almost futile against the extreme sweetness. Can’t say that we’re big fans so far. In the mouth it’s well weighted with a chewy texture. Mild-medium carbonation and the body is about medium-full. Our palates aren’t well trained for, nor do we like Kriek but a sharp and almost phenolic injection of currants and bitter fruit initiates the flavour profile. Thankfully, this wanes and the more traditional Quad flavours like clove, treacle and molasses carry forward through the mid. The ABV (9.7%) develops quite late effectively bridging on to the fruity, sweet and ultimately complex finish. The arsenal of flavours that are lingering on the rear palate is amazing. Fig, toffee, molasses and cherry hang around for an eternity displaying excellent duration. Well, we’re glad we didn’t write this off too soon because we would have been sorely mistaken. As our palates warmed to this unique drop the more we like it, so good move to sell it in a big bottle because this beer isn’t one for a sprint. Trust us, pop it and slowly sip over an hour or two. The way it matures is exceptional. Way to come back!