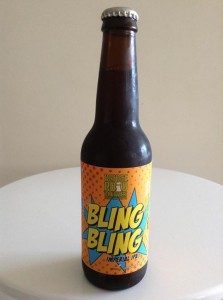 “OK the concept for this beer is quite simple , take our standard Bling IPA recipe and pimp it to create a hop bomb at around 8.5% alc. The real challenge was creating an imperial IPA that reeks of fresh, pungent hop aromas but doesn’t give the impression that it is trying to tear the teeth from your jawbone”.

As their description states, this bad boy is their bigger, badder and hoppier brother of the Bling IPA. The strip would have you believe a kind of cheap 70’s comic is on show as the “Bling Bling” is being protruded like batman giving his enemies a good old fashioned ‘schwack’ and ‘zoom’. We served this imperial IPA, as expected, in to an IPA glass. The dark amber appearance has a touch of honey flowing though. Not the greatest of heads ever to be seen but a short white cap quickly reduced to a few floating patches of foam on top. Although the head lacked retention some healthy, spotted lace trails were being released down the glass. A vigorous swirl awakens strong wafts of resiny/herbal hops, grapefruit, pineapple, lychee, white pepper, eucalyptus, prawn chips and delicate caramel malts. Maybe a slight suggestion of alcohol in here too but for 8.5% ABV it’s being pretty well behaved. In the mouth it’s moderately weighted with a soft, dry texture. Carbonation and body are both medium. Not overly bitter as the bottle would have you think. The brewers have given this a 10/10 for hop bitterness but it’s actually a lot milder than that. An assertive bitterness does grab hold of the tongue upon entry. Sharp, citric grapefruit, orange peel and herbal resins emphasise this bitterness as it crescendo’s through the mid. The bitterness subsides a touch as the malts try to blanket the hops, leading on to a dry bitter finish. Again, the 8.5% ABV is pretty well disguised in flavour as it is in the aroma. Look, give us this in a pub and we’d love it but up against the best IPA’s in Australia at the moment it would struggle. No points taken off though, this is a pretty damn good IPA and the brewers should be happy with it. We liked it.