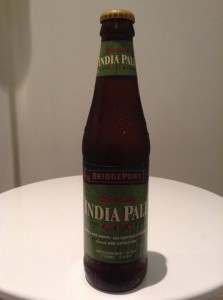 Like Danni Minogue to Kylie Minogue, Antonia Kidman to Nicole Kidman, Ashlee to Jessica Simpson…..this IPA will unfortunately be known as 2nd rate to it’s bigger and better brother. The Kingpin. We can say this now because we have had the opportunity to taste both of these beers on tap before and this IPA (as good as it is) doesn’t come close to the kingpin. Anyhow, served in an IPA glass the hazy orange pour arouses a fluffy 1 finger white head that eventually settles to a thinly layered crown with good lacing. The aroma is definitely citrus driven, mainly orange, grapefruit, mandarin and lemon with some jammy marmalade thrown in. Some light and funky yeast is coming though giving off this strange dry and musty aroma which doesn’t gel. A touch of malt sweetness and farmyard are also detected. Reminds us of a Saison. Good mouth feel, nice and full with a frothy texture. Medium bodied. Carbonation is a touch prickly but quite moderate. Similar to the aroma the flavour starts with a short, citric burst of lemon muddled up with some spice and those pesky farmyard flavours again. This slight funky sourness just isn’t working with us. Some caramel and malt sweetness arrives late with a touch of citrus that is followed by the mild bitter finish. 5.5% ABV is quite low for an IPA, but whether this is an old bottle or not their bigger problem is this off putting funkiness. Definitely didn’t taste like this on tap. Will keep this review for now and maybe re-rate the keg version, because that was much better than this. Disappointing.