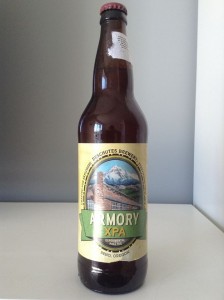 “It’s fitting this experimental pale ale was the first beer brewed at our Portland Pub. This XPA gets its bitter twist from Nugget and Northern Brewer hops, then delivers a pronounced citrus kick from Cascade, Centennial and Citra hops. Consider this your next hop obsession.”

Served in a shaker glass the slightly hazy amber orange pour produced a tight 1 inch head that persists. Falling away but always keeping a thin layer of foam on top of the liquid ensures good lacing. The first element we pick up off the aroma is a subtle funky sourness. Blood orange, mandarin, citrus, pine and some pale malts also come through. Though, it’s the slightly sour and slightly candied lemon that has got us interested. The chalky mouthfeel is accentuated by the medium carbonation, the 58 IBU and just short of full bodied texture. Feels very nice in the mouth. Although the flavour is quite restrained there is a nice little tussle between the bitter, piney hops and the sweet, biscuity malt. Some bitter grapefruit and orange peel initially is softened by hints of honey and caramel. The 5.9% ABV was surprisingly concealed bearing in mind the subdued flavour profile. The funky, sour lemon that featured in the aroma is MIA in flavour which is quite disappointing really because we were hoping for a sour and yeasty palate to shake up the standard hops and malt we’re getting. On the whole it’s a nice ale but slightly boring for an “experimental”.