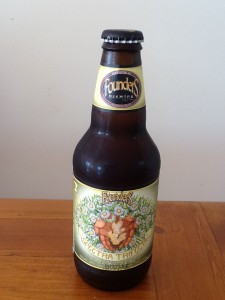 The new drop from the masters at Founders Brewery in the USA, is a Kolsch ( fermenting ale yeast at a colder temperature so the beer is more crisp without fruity esters) that inorpates the use of earthy and slightly sweet chamomile, a touch of citrusy lemongrass and a hint of spicy ginger.

Poured into a half pint glass, there is big carbonation that fades quickly, and leaves a 3-4mm white head. It’s golden in colour and fairly clear. Initial aromas of ginger, almost that lemonade/shandy aroma of gooseberries, and very mild lager like hops. The first sip is interesting. We get definite earthy flavours, obviously from the chamomile flowers, mixed in with more ginger that is mild but leaves a bit of spice on the palate. There is a nice refreshing amount of carbonation in the mouth, and a balanced drying bitterness on the throat. We must admit it’s hard to detect the lemongrass flavour but there is obviously a citrusy style bitterness but we can’t say it’s lemongrass. This drop sits at 5.9% alc vol, but you wouldn’t know it. Alcohol is hidden really well in the flavour profile. There is mild to moderate body and good length. It’s a real summery, refreshing ale. We smashed it and thought we could easily have another. It’s definitely different to their other drops, personally not as enjoyable, but what they sought out to achieve was well brewed. Maybe some more lemongrass, or the use of lemony hops like what Stone brewing use may have added to it. Otherwise it’s drinkable.