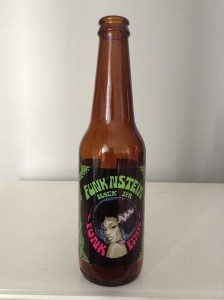 “Funk’nstein’s lineage began at our first experiment, an adored black IPA that packed pubs and pipped popularity contests. Being scrumptious and gorgeous was never enough, so we continued to chop, tweak, shock and reassemble her. When you two merge, you’ll experience her vivid, velvety and voluptuous body and soul of tropical grapefuit punch. Embrace her, she’s tasty”.

Quite a rare beer this one, but not as rare as an afro in the 70’s. Cool label. Served in an IPA glass the black, cola-like pour produces a decent 1 and a half finger beige head that maintains quite well, eventually settling to a thin covering on top. OK lacing.  Good balance essentially, but at first, big floral hops come gushing out offering wafts of pine, grapefruit and tropical fruits. Roasted and malty undertones of coffee, chocolate and caramel make up the rest of the aroma. In the mouth it’s smooth with a slightly creamy texture. Medium carbonation and body. Basic, yet tasty flavor profile with an assertive bitterness upfront being nicely mellowed out in the mid by roasted coffee and malts. Well balanced finish with fruity hops and roasted malts settling on the tongue. Good length. This beer is a collaboration of a few blokes who home brewed this beer and have tweaked it. Not as good as say the mountain goat midnight IPA , but it’s a good effort from a small scale operation.