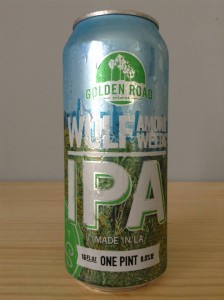 “This beer is a balanced showcase of the majestic hop specie, in Latin, Humulus Lupulus, which translates “Wolf Among Weeds”.  It’s our celebration of California’s enthusiasm for hop-forward IPAs.  At 8%, Wolf will sneak up on you from behind the robust citrus and dank earthy hop notes mirrored in its aroma and flavor profile.”

Served in an IPA glass. The bright but cloudy golden appearance is capped off by a fluffy two finger head that gradually retreats to a rocky overlay that leaves thick, blotchy lace trails clinging to the glass. This seriously slick aroma has a certain similarity to Sierra Nevada’s Hop Hunter – extremely piney with citric additions of passion fruit, pineapple and ripe grapefruit. It’s very well contained though, bitterness is conserved. Suggestions of lavender, orange peel, honey and kumquat only just allow an almost hidden biscuity/buttery malt backing to come through. Almost has a custard-like character to it as well. Very nice. A nice weight is held in the mouth, Co2 is lifted and the brawny 80 IBU injects that desert-like dryness to the palate. The 8% ABV certainly adds a degree of warmth while the moderate body assures easy progression and a somewhat dangerous session-ability. Clean, herbal characters hit the taste buds initially. This somewhat oily citrus accent cuts through a kind of buttery malt flavour through the mid. A plethora of tropical fruits like pineapple, passion fruit, grapefruit and candied lemon develop as an extremely bitter, citric and slightly floral finish rounds it all out. A mention to the length has to be brought up as well. A long and thirsty dryness is felt on the back end. We hate to break it to the befallen craft beer drinkers out there but Golden Road have sold out to the conglomerates (AB Inbev). Aussie craft fans also feel the pain as respected brewers like Matilda Bay and Mountain Goat have also sold up, so we know the feeling. Here’s to hoping this sensational beer doesn’t change. One bit.