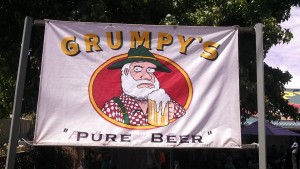 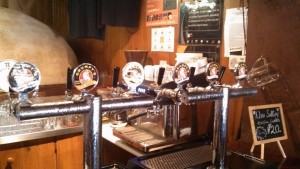 The next stop on our Adelaide brewery tour was Grumpy’s Brewhaus. Once we dusted ourselves off from the previous night’s festivities we hopped in a cab and were driven South East out of the city for roughly 30-35 minutes through the picturesque wine region of Adelaide Hills. The brewery itself reminds us of an historic federation style house with a big, lovely front yard where the solo singer was strumming out laid back Sunday tunes for the punters. The interior was really cool, kind of old country Australian cottage meets Austrian Apres-ski bar with it’s old, dark timber floors and beams. The selection of beers was quite small and mainly European-inspired. There were 6 taps with one pouring a cider, leaving a Munich Lager, Honey Lager,  Bitter, Dunkel and a Porter pouring through the other 5. They were all good but none of them were great. The Honey Lager and the Porter were the better selections while the Bitter, Dunkel and Munich Lager left a bit to be desired. The certain winner of the afternoon was the delicious wood fire pizza’s though, which we demolished within minutes. All in all we weren’t entirely impressed with the beers but the food and the atmosphere at the brewery was really good. Considering the location of the brewery is quite isolated it wouldn’t be one to hang about at for long but if you’re a fan of everything boozy there are a few good wineries in the area and could easily make for a great stop off to throw some grain in between the grapes.