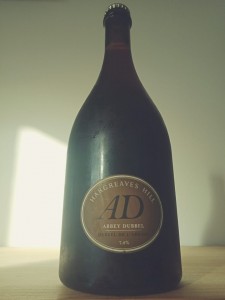 “Drawing inspiration from the Abbey brewing tradition, we use Belgian Special B malt and a funky Belgian yeast, to create notes of raisins and sarsaparilla.”

Appearance: Deep reddish-brown revealing mahogany hues when held to the light. The head is loose and rocky, eventually retreating to the rim. Healthy lace clings to the glass as it subsides.

Aroma: The first thing that hits the olfactory’s are these intense caramel and toffee overtones. Butterscotch and cocoa then morphing in to more yeast-driven notes of candied banana, honey, nutmeg, caramelized pears, raisin and prunes/dates. Getting an uber rich maple and or treacle sweetness from it once it settles…borderline cloying.

Flavour: That super rich sweetness transitions to the palate. There’s a hint of bitterness but it does little to stem the wave of caramel, toffee, honey and maple sweetness that follows. Very fine hints of toasty malt, cocoa and apple pie forming late as it finishes dry, fruity and spicy. Some good length on it though.

Mouthfeel: This is where it goes down hill a bit…it’s too thin for the style. It also feels kind of saturated from the low co2 and minimal balance.

Overall: Definitely not convinced but in saying that it’s still not a bad attempt. The big difference between this and something like a Westmalle or even our very own Mad Abbot is the balance. Even though it’s not really there it still isn’t a too bad a drop.