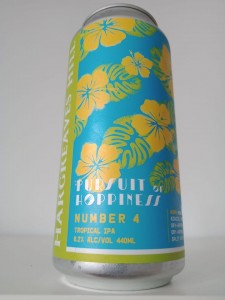 “The Pursuit of Hoppiness is an ongoing speciality series in which we explore the somewhat endless possibilities in the art of brewing with hops. Drinkers are given an exclusive look into the brewing process, with varieties, additions and time frame listed on the can label.
No.4 uses juicy new world varieties which add tropical character and aroma and will transport you to the oasis of your dreams.”

Appearance: Pale golden yellow with a fairly heavy haze. It forms a thumb of foamy white head which holds its shape and decorates the glass as we imbibe.

Aroma: Exactly what the can portrays – tropical island fruits such as pineapple, passion fruit, rockmelon, lychee, green mango, lime and orange citrus. Getting quite a strong presence of pine needles from it as well. Subtle earthy notes buried deep…sort of feeds in to the grainy malt profile at the same time.

Flavour: It comes on with a bit of tangy citrus, green mango and rockmelon closely followed by slightly more acidic citrus and light florals. Maybe just a flutter of peppery spice coming through, pine and passion fruit leading in to a somewhat juicy finish jam packed with tropical persuasion.

Mouthfeel: Extremely light and crushable. Finely carbonated with the 6.2% ABV reasonably well concealed. Maybe flirting with being a bit thin if we had to criticise.

Overall: Definitely the lightest release in the series but then again they’re brewing to the season which makes sense. Can’t say we’re totally sold on it…just a tad underwhelming. Still looking forward to what variation they’ll do next though!