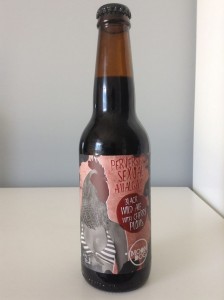 “Some things don’t seem right but you want them anyway. That quasi-erotic feeling you get when Charlton Heston makes out with Zira the chimp. Sure, she reluctantly says “All right, but you’re so damned ugly….” But you know she’s into it. And as with all things a bit perverted, so are you. This beer is released every now and then… And increased birth rates can be correlated to the releases. Coincidence? Probably”.

There’s always a sure bet with some events. Like the sun rising every morning, or putting money on black caviar…or moon dog brewing a whacky, out there beer that looks really really audacious! We served this in a beer tulip. The mat black pour produced little head which dissipated instantly leaving no head at all. Even a vigorous twirl of the glass couldn’t conjure up any foam. The aroma is obviously dominated by tart cherries and citric hints of sour lemon, but there are very subtle hints of damp wood, oak, vanilla, phenols and plum that add an extra funky complexity to this beautifully dank aroma. The mouth feel is extremely oily with mild carbonation. Medium body. Upfront the flavour is very similar to the aroma with sour lemon and tart cherries dominating. Behind it all, slightly miffed is a subtle hint of sweetness from the Vienna malts. The sourness carries on through the mid-palate and finishes with soft oak and subtle chipotle style spice. 6.1% ABV is very well buried among the tart, funky flavours. Once again, Moon dog has successfully lived up to it’s name but the feature flavours are…well…so so. Nothing wrong with the beer, just didn’t really hit the mark for us.