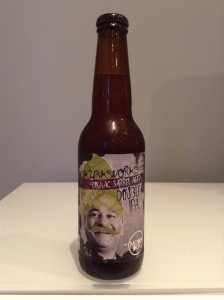 ““Skunkworks” (def.) noun /skəNGkwərks/ 1. (Project) Unhindered by the shackles of bureaucracy and conventional wisdom, a project that is developed by a small, loosely structured group of people primarily for the sake of radical innovation. 2. (Double IPA) A mysterious elixir of stupefying potency.”

This is an interesting IPA, but what else would you expect from these perfectly unorthodox brewers? Served in a goblet the muddy, golden-amber pour constructs a finger of off white head that gradually settles to patchy foam on top. Minimal lacing. The cognac is showcased quite well on the nose, it isn’t dominant, if anything it actually marries well with the soft fruity hops, subtle alcohol, oak, toffee and peppery spice. In the mouth it feels full with an oily texture. Mildly carbonated with medium-full body. The cognac component is very subtle on the palate, at times it can be mistaken by the high booze content (9.1% ABV) but is accentuated by the woody hints of oak. The astringent fore-flavor is followed by a mild hop bitterness with a return of oak, alcohol and toffee that carries well on through and pairs up with fruity hops, delivering a well balanced, and long drawn out finish. A little alcohol warming in the tail as well. Good length. All up a very unique IPA but in saying that, it’s what these guys pride themselves on. Fine beer.