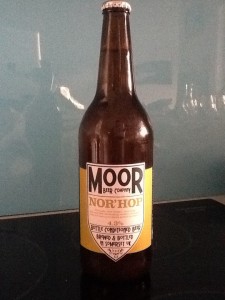 “This ultra-pale ale is brewed with a limited availability hop from America to impart a pronounced floral and citric quality to the beer, with honey and elderflower in the nose.  This beer had been so anticipated that in less than two weeks of release it had won a beer festival and sold out.  Not wanting to disappoint its many fans, we have rebrewed it and added it to our list of permanent beers where it continues to be the benchmark for the style around the world”.

This microbrewery is from Somerset UK. Pours a real light golden colour, and for a golden ale, this makes sense. Pours with minimal head. The first aroma’s are intense passion fruit and citrus. The palate then backs this up, with the addition of honey. It’s quite watery in the mouth lacking real depth but sitting at 4.3%, we guess that’s expected. This brew states that it showcases northern hemisphere hops and has a 4/5 bitterness scale. We a bit unsure about this scale cause there is some drying on the back of the throat. It’s not an IPA. But, for a golden ale, it certainly is hoppy. Very minimal lacing on the glass apart from occasional soapy residue.  Mild carbonation in the mouth. Overall, it’s a sessionable golden ale but only average.