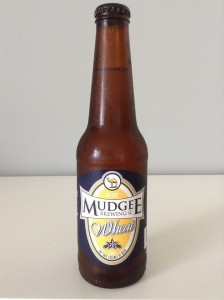 “Mudgee Wheat is a traditional European-style beer, brewed using lots of wheat malt. It also uses Hefeweizen yeast, which gives the beer its cloudy appearance, and its distinctive aromas of clove and banana.”

Big ups to our younger bro for picking this bottle up from the brewery. Served in a weizen glass the hazy straw-yellow pour constructs a tight 1 inch head that fizzled away to a ring with a patch of foam in the middle. Standard lacing. Well, all the main stayers are here – banana lollies, clove, bubblegum and wheat but not much else. Maybe a really subtle funky undertone but from the outset we’re fearing another mainstream Wit. The mouth feel does offer a creamy texture, but it’s slightly watered down. Mildly carbonated. Very light on, hints of wheat malt and banana lollies upfront are met with a touch of clove through the mid-palate. Finishes sweet with lingering banana and wheat malt on the back end. Pretty good length. 4.7% ABV is about standard. As this beer was going nowhere we decided to throw a wedge of orange in to see what happens and instantly the zesty flavours balanced out the cloying sweetness. Its nothing new as we’ve tried it before with other wits such as blue moon and Hoegaarden and it has improved the flavour. Essentially a bit too home-brewish.