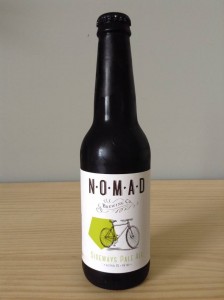 “Intensly hoppy pale ale, bursting with the scents of Aussie and American hops. Brewed for that hop loving experience and to show that low ABV should not mean low flavour. This beer tastes big and drinks like a beer at twice its ABV, but will be nice to you as the night moves on. If you love hops then this is your beer!, our ultimate summer session Pale Ale with flavour!”

Served in a shaker glass. The appearance offers a slightly pale amber hue with highly active carbonation. A frothy head swells to about two fingers in height before peeling off a little and retaining at a good 1cm overlay. Laced well. The aroma is a little restrained but we still manage to get a substantial citrus character coming off. Not so much the bitter citrus fruits on the nose, it’s sweeter and more nectary like mandarin or tangerines. A dry and somewhat grainy malt backing is evident but again it’s requiring a good long whiff to pick it up. A nice summery aroma but it’s all a bit too delicate. It does possess a nice, bold mouth feel though, Co2 is bouncy and the 48 IBU is providing a dry, bitter texture. Still quite light on in body and the 4% ABV guarantees a super sessional pale ale. Contrary to the aroma, the flavour turns on the bitter citrus fruits with orange and ripe ruby grapefruit leading out. It develops a more under ripe yellow grapefruit bitterness as the hops kick in over the mid. The grapefruit bitterness maintains and delivers a dry finish with good duration on to the back palate. To summarize look at it this way, if you’re after a 6 pack of low ABV, full flavoured pale ales then replace the thought of the 150 Lashes with this, because no one wants to forsake flavour for being designated driver now do they? This ale is crisp, light, hoppy, full flavoured and low in ABV. Perfect summer session beer. Kudos, Nomad.