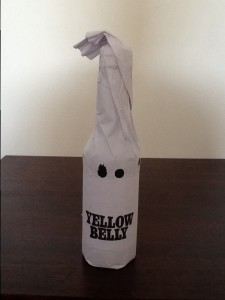 We have not had many beers from this Swedish brewery (omnipollo), who have teamed up with Buxton brewery (U.K). We are incredibly interested to read that this brew is a peanut butter stout, sitting at 11.0% alc vol. The catchy paper covering, synonymous with the klu klux clan, and the name ‘yellow belly’ means a person who is without courage…and this beer according to the Brewers has been brewed to celebrate being open minded.

Popping the cap on this bad boy reveals a beautiful aroma of peanuts, chocolate, sweet biscuit malt, and maple syrup. It reminds us a bit of Rogues voodoo doughnut range. It’s pours a mat black with a small tan head that forms in the tulip glass and minimal carbonation seen. There is no lacing on the glass. This drop has an oily complexion that we often see with good imperial beers. The flavour profile reveals a dominate booze burn that is actually subdued once all the flavours kick in, but also intense roasted malts, espresso, sweet brown sugars, butterscotch, cacao, and fudge. Wow this is a really good craft beer. It’s full bodied but the 11% alc is contained beautifully. The joy of this beer is the aroma..we could sniff it all day long. The flavour is good but the aroma is so much better. This is a top 10 all time imperial stout. Brilliant brewing.