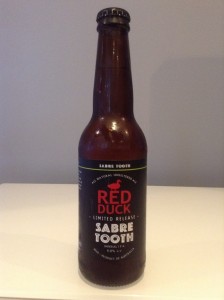 “Red Duck Sabre Tooth is a big hoppy pale ale, with a huge over-bite! We used lots of hops, and then some more; Columbus, Chinook and Centennial. All these hops smell fantastic, and in a massive ale like this, really pack some head biting bitterness. Our recipe says that the IBUs are 89. But like all Red Duck ales, we balanced that with equally big pale malt characters, so it is probably possible to take on more than one Sabre Tooth!”

This is a good looking imperial IPA from this busy South Australian craft brewery. Served in an IPA glass the cloudy, dark orange pour constructs a pillowy 1 and a half finger white head that settles to a dense layer with good retention. Laced well. Slightly subdued aroma for an imperial IPA. Lychee, pineapple, mango, candy and resinous pine make up the hoppy side while quite a well presented malt profile offers sweeter wafts of caramel and honey. In the mouth it feels frothy with medium-high carbonation and good body. Big punchy hops upfront make way for a sweet fruity mid-palate. Pine resins, grapefruit and subtle honey carry forward and a touch of peppery spice on the back end rounds off a lovely imperial IPA. The 9% ABV is so well buried you would be fooled into thinking it was around the 6% mark. By the end we were loving it. Great beer.