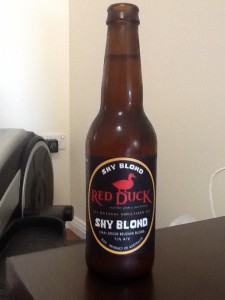 “Red Duck Shy Blond isn’t really very shy at all, but a ramped up Chai Spiced Belgian Blond ale. Notes of cinnamon, cloves, aniseed, ginger, fennel, cardamon, black pepper, black tea and a touch of honey, all cheekily wrapped up in a strong Belgian ale. Its all in there, but we do mean notes, not a whole orchestral movement, because overall Shy Blond is a sweet harmony of spices, in a easy drinking ale. Only one batch made, so she is rare, and beautiful.”

This beer from red duck is a pearler. It’s a chai spiced Belgian blonde ale and so very fragrant. Served in to a beer tulip, it pours with a nice thick head which retains and laces well. We’re immediately thinking Hoegaarden as the spicy wafts of cinnamon, pepper, aniseed and clove are well offset by zesty hints of lemon, honey and doughy malts. The taste is quite complex. Full of delicious spice, sweet honey, herbal hops and hints of warming black pepper  and mild alcohol warmth at the end of each swig. It looks like we’re drinking a golden ale or a lager it’s so lightly coloured but that certain Belgian smell is undeniable. It’s 7.1% ABV but hidden so well. Every sip is just so pleasurable. According to the bottle there are also aniseed, ginger, fennel and black tea thrown in. This beer is for the adventurous craft lover, and it’s actually better than Hoegaarden. We know that’s a big call but so worth trying if you can find one. Brilliant beer.