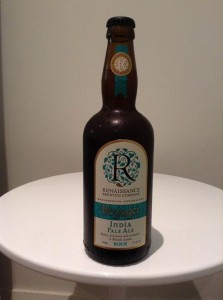 “Originally brewed as a one off beer for use through a beer engine, Voyager is now being relaunched as a carbonated IPA on tap and in 500ml bottles. Inspired by the boldly hoppy Ales of old that were exported from Britain to the furthest corners of her vast and glorious empire, Voyager I.P.A. is a rich satisfying Ale with an emphatic hop bite.”

This is a Kiwi brewery we hold in very high regard, there isn’t a lot of breathing space between this brewery and world class NZ breweries such as 8 wired, Tuatara and Epic. Served in an IPA glass. Our slightly aggressive pour almost backfires on us as we’re met with a mountainous 3 finger head that takes an eternity to deconstruct, leaving dense, sudsy lacing clinging to the glass. Brilliant amber appearance with a soft copper hue. Still very heady from the pour but we pick up strong herbal/vinous wafts of dill, parsley and coriander that really emphasise the fruity/leafy hop characters. Quite dry and slightly woody with some hints of resinous pine or cedar creeping in over the caramel malt backdrop. Very nice. On the tongue it’s nice and heavy with a fair weight behind it. Hardly any grip on the tongue so it’s just just bold and full as it slowly rolls down, giving the mouth a fair coating at the same time. Upfront an assertive bitterness allows a suggestion of sweet, caramelly malts to develop before it cuts through and forms hints of bitter citrus fruits through the mid. A splash of tropical fruit bridges on to the dry, bitter finish that displays good duration on the back palate. The 6% ABV is sensible and plays a great role in the formwork but never overpowers. Really nice IPA with good balance between bitterness and malts. This one would have to be up there with one of the best we’ve tried from this brewery. Delicious.