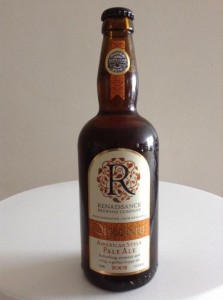 “We’ll bet you can remember your first glass of Sauvignon Blanc, all those racy, up-front fruit flavours and that bracing punch of acidity. Allow us to introduce the beer world’s equivalent from the home of the world’s best Sauvignon Blanc. Pioneered in the American state of California, American Pale Ale, or APA for short, was designed to showcase the unique resiny fruitiness of American hops. Here at Renaissance we have given this style a truly New Zealand flavour by using Cascade and Willamette hops that are grown over the hill in Nelson.”

Another pearler from the kiwi masters at Renaissance brewing, it’s no surprise that this is a silver medal winning beer at the 2010 international beer awards. We served this ale in a shaker glass, the slightly hazy copper-orange pour constructed a pillowy 1 and a half inch white head that retains well. Good lacing. As most good APA aroma’s do, a really well balanced mix between grassy hops and biscuity, bready malts is on show. We get a little grape which is a feature aroma of NZ’s own Motueka hop while some spice, pepper and zesty citrus make up the rest of the nose. The mouth feel is slick, almost slippery with medium carbonation. Quite light on the palate, there is a mild hop bitterness upfront with mild sweetness in the mid-palate that finishes dry and slightly citric. A relatively sharp zestiness lingers very nicely on the back end. Good length. Plenty of depth and flavour being showcased here for such a low ABV (4.5%). Strong aroma, but a little weaker in taste, overall a pretty decent APA.