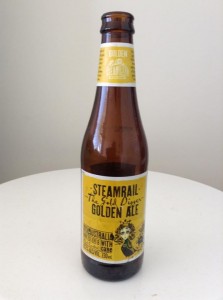 “The Gold Digger Golden Ale beer is a smooth, rich ale that is honey gold in colour with a refreshing subtle hop taste that is perfectly balanced with delicious fruity aromas.”

It’s a strange brew this one, it’s labelled well with what seems to be a fair story behind the beer but we have this gut feeling Steam rail is a brewery that’s contract brewed and owned by a bigger parent company like CUB or Lion Nathan but nothing on the bottle shows this.

Anyhow, we served in a shaker glass. The transparent golden pour generates a standard one finger white head that reduces to a light dusting on top. OK lacing. Well there isn’t a great deal in the aroma, with a vigorous twirl of the glass we can only manage to pick up soft floral scents of pineapple, stone fruits and mild pale malts. Light sweetness. Weak as. Surprisingly the mouth feel is OK, a tad fuller than we were expecting. Moderate carbonation and body. It’s all well and good having a decent mouth feel but when there is no flavour to back it up then what’s the point? All we can muster up is a grainy fore flavour which is followed by a mild sweetness and an unwelcome metallic taste in the finish. 4.5% ABV. Put this golden ale up against Mountain goats or feral’s and there is a stark difference. This lacks aroma, body, flavour and overall character. We won’t be returning any time soon.