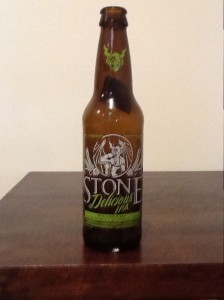 This is one of the top microbreweries in the states. This brew uses lemon drop and El dorado hops giving it a lovely citrus burst and allowing for nearly everybody who drinks this to enjoy. We don’t often see these hops so that is a bonus.

With a nice golden copper hue, this IPA pours with a big 20mm thick foamy head that retains almost entirely, leaving lots of bubbly lacing on the glass. There is moderate carbonation in the glass. The nose is very fragrant..lots of caramel, toffee, with citrus, lemon, bit of pine and mild alcohol hit. This drop is 7.7% so we expect a little but for it to be very subdued and balanced. First sip delivers a nice constrained bitterness, sweet toffe malt, more citrus hop, candied lemon, and a booze backbone that as expected doesn’t overpower but is present lingering on the backpalate. Medium carbonation in the mouth with a good body that gives this IPA depth..further showcasing good brewing processes. This beer was rated as 96/100 on ratebeer.com.au and we think it’s a nice enjoyable IPA, but there are better ones from this brewery as they have brewed so so many really good ones. For newbies to the IPA, we feel there are other brews with lower alc vol that would appeal more.