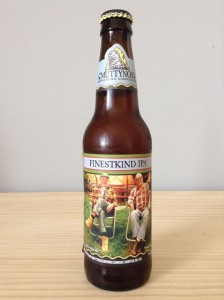 “Smuttynose IPA is a physical salute to the glory of the American hop grower. The citrusy hop flavor coming from a mixture of Simcoe and Santiams is pleasantly balanced by a smooth bitterness from the Amarillo hops. The beer itself is light bodied and crisp with a golden color that will throw a slight haze, as we bottle it unfiltered. At 65 IBU’s, this is definitely not a training-wheels IPA, but is meant for hop lovers looking to satisfy their craving in a way that’s not easy to find. We think they’ll be quite pleased.”

This is our first entry for this American craft brewery. Initially we were at odds with what their name was all about but a little research reveals that the name ‘Smuttynose’ is actually a small island off the coast of New Hampshire, where the brewery is situated. Served in an IPA glass. From the pour we get a light yellow hue at the foot but a more deep orange/bright amber at the top. A thin, snow white overlay is formed, speedily receding and establishing a light but persistent film with dense, hieroglyphic-like lace trails. Quite a unique aroma, one we’ve rarely come across before. The first perfumes that spring to mind are kumquat, underripe mandarin, orange peel and spent grain husks. Once the beer settles more of the characteristic grapefruit, tangy orange and pine needle is revealed. Just enough malt to pull it back too, undertones of honey and caramel add a pleasant sweetness to the nose. Surprisingly welcoming in the mouth. Mild dryness without any harsh bite from the 6.9% ABV. The 65 IBU provides a delicate bitterness but it’s kept well in check. Nice overall smoothness to the texture of this IPA. Decent transition from the nose on to the palate as well. A cocktail of tropical fruits and citrus are balanced by a rounded malt sweetness. A gentle bitterness is introduced to the front palate and flows on through the mid, delivering a soft, fruity finish with only a suggestion of hop dryness on the rear. We’re blown away by how approachable this beer is. Super smooth and full of flavour and would certainly double up as a great entry level IPA. Not bad at all.