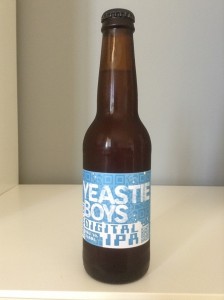 “A new world India Pale Ale inspired more by our traditional forefathers than then modern pretenders. Digital IPA is defined by its heavy use of late kettle hopping and very restrained use of dry hopping – a technique, in contrast to our peers, that goes a long way to proving Yeastie Boys’ philosophy of ‘fresh is not best’. IPA as it was originally intended.”

We’ve definitely given this breweries range a good crack of late. Everything from the Rex attitude, the PKB to the Gunnamatta and the Minnimatta. Now it’s time for their Digital IPA. This one we served into an IPA  glass. Slightly cloudy yellow-gold appearance with a soft straw hue. The aroma is dominated by honey with subtle undertones of dried tea leaf, sweet malts, orange citrus and grain. Spicy hops round off this unique nose. In the mouth it feels smooth, flirting with being too thin. Mild carbonation and mild-medium bitterness. Mild body, pretty light on for an IPA. All the big grapefruit, pine and bitter hoppy flavours seem to be MIA on the tongue. Initially there is a soft fruity presence but that disappears and a malty sweet, honey and a slightly grainy palate and back end takes shape. Mildly bitter, dry finish. A bit short. 7% ABV is actually quite well hidden. As we mentioned before it’s good but nothing special. Big fans of these Kiwi brewers but we thought they may have just slightly missed the 8 ball here.