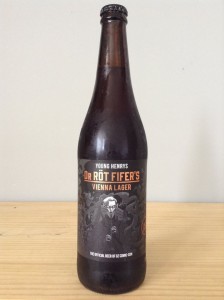 “Young Henrys and Oz Comic-Con have teamed up with legendary artist Doug Holgate to produce the most sinister brew ever known to man. Enter the malevolent Dr Röt Fifer. From lofty peaks to cobbled streets, The Doctor is renowned for two things: his hypnotising pipe melodies and his Vienna Lager. With a splash of black magic, Young Henrys and Oz Comic-Con have bottled The Doctor’s copper concoction to present the Official Beer of Oz Comic-Con: Dr Röt Fifer’s Vienna Lager.”

Served in a shaker glass. Rot Fifer presents an attractive copper complexion with good clarity. The fluffy pancake head swells to about two fingers before establishing a healthy overlay that leaves a set of messy rings as we imbibe. Our first impressions of the aroma are very raw and rustic. A strong freshly cracked grain character leads out with notes of hay, toffee, figs, earthy malts and toast in support. The aroma kind of has that alluring smell you get when you walk in to a brewery that’s just their grains through the mill. It offers a nice sweetness too, we want to say honey but it has more of a melted caramel viscosity to it. Decent. It’s actually a really nice aroma. In the mouth it’s well weighted with a super smooth, almost velvety texture. Co2 is mild-medium and the 5.3% ABV is expectedly passive. The flavour seems to follow on from the nose, albeit indirectly. The prominent malt backbone dominates the front palate and even hints at dark stone fruits at times.Toffee notes also come through as that taste of freshly cracked grain we picked up on the nose returns in flavour. A subtle toasty note pops up through the mid and lays a platform for the dry, nutty finish to endure on. Putting our lack of interest in comics aside, this Vienna Lager, simply on taste and aroma has impressed us. She’s smooth on the palate, full flavoured and well bodied. Quite sweet though, and maybe a little cloying by the end but it doesn’t hinder the overall quality of the beer. A decent offering from Young Henry’s.