Appearance: Impenetrable black with a wispy brown head forming on top. It swiftly reduced to a thin halo with a wet lace left in its wake.

Aroma: Quite a complex number with a lot of it coming from the red wine barrels. Muted notes of chocolate cake, Cherry Ripe, coconut, marzipan, chocolate mousse and spicy bourbon. The latter surely a byproduct of the barrels which impart an enormous amount of vinous red berry tartness and musty oak. A fair bit of the booze showing too…really stings the nostrils.

Mouthfeel: Somewhat slick, oily and sticky. Not a great deal of body to it but it still holds up nicely on the palate. Low co2. 10.2% ABV pokes through here and there.

Overall: At first we thought it could have done without the aging in red wine barrels but it became softer as it settled. We’d still love to try the non barrel aged version though. Not a bad drop. 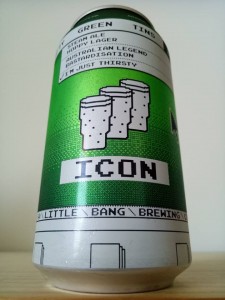 Appearance: Clear golden amber with a solid two fingers head on top. It gradually retracts and weaves a fine lace as it subsides.

Flavour: Clearly takes on more of a lager/steam ale approach. Grainy/cracker malts, a hint of honey sweetness and a touch of starchy vegetables on entry. Grassy/herbal hop notes through the middle that roll in to a somewhat dry and peppery finish. Good length.

Overall: Being 80’s baby’s the kind of Atari-esque label certainly caught our eye but the beer itself didn’t really wow us a lot. Not bad, we’ll be reaching for something a little stronger of theirs next time. 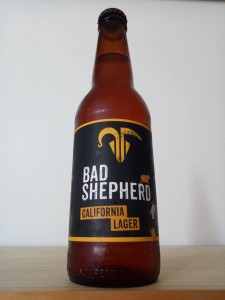 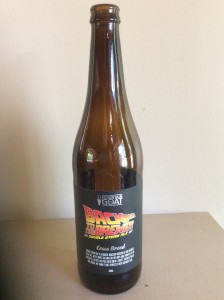 This brew is a bigger, brassier version of our regular steam ale. We have upped the ante on hops and pumped up the mouthfeel to give this pale gold brew a fruity, tropical palate and aroma. We think it goes perfectly with birthday cake. It’s a 20th birthday celebration with a collaboration with Two Birds and Hop Products Australia.

Poured into a pint glass, we see a hazy dirty dishwater appearance or that of tropical breakfast juice. Difficult to see the carbonation through the cloudiness. A bubbly off white 10mm head slowly fades into a 5mm one. Nose is pure tropical aroma – pineapple, orange, guava, green mango with pine, and some sweet malt and bread. Reminds us of juice with a touch of alcohol. First sip is surprisingly smooth. We get restrained bitterness mixing with pine, some citrus like orange, a touch of sweet grapefruit, and less tropical flavours than the nose but still pineapple, guava. Moderate body here but with minimal carbonation you take a big gulp and it smoothly slides down the gullet. Not a lot of lingering flavour here, other than a touch of spice. We note the Alc vol of 7.3% and it’s so hidden. You get more of a buzz on the forehead before you really detect it. There is a sweet caramel malt base here mixing nicely with the citrus and tropical hops. We note scattered lacing down the glass. As we near then end, we don’t really want it to end. So fruity, so tasty. Beautifully balanced malt to hop to booze ratio. Wow this absolutely pisses all over the steam ale. It’s not even a comparison. This is basically NEIPA style. Absolutely one of their better beers we have sampled over the last 17 years. Not sure where to fault. 1 star off for being associated with the steam ale. Thank god we bought 6 of them. 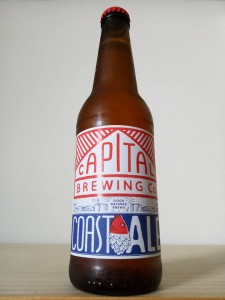 Served in a shaker. Relatively clear golden appearance. The pour yields a short white cap which peels back to a thin film with some sparse lace clinging to the glass.
We’re getting a nice fusion of grainy and semi sweet malts with a with a hint of zesty orange citrus. Something sweet and candied in there….maybe marmalade? Picking up a soft spice, apple, paw paw or rockmelon, corn flakes and hay. A little floral bouquet in there too. A nice assortment of aromas here.
The flavour profile is subtle but certainly not short on character. Somewhat typical lager notes on entry – dry, grainy, a touch of earthy hops with some adjunct fruits and spice. The grainy and straw-like malts carry it through in to a mild finish which offers hints of green apple and citrus on the rear.
The texture is super light, clean and crisp. Mild-moderate body with good lift from the co2. Veeerrrryyy pound-able.
We’ve been pretty impressed by this breweries range so far. And although the wow factor is limited with this style they’ve still managed to make it interesting, tasty and ultra sessional. Another decent offering from the Capital boys. 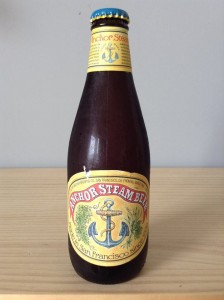 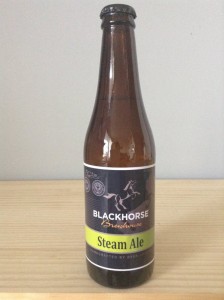 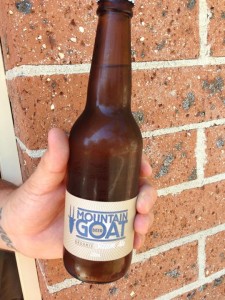 “The Steam is a crisp, certified organic ale. We incorporate a slap of wheat malt in the grist make-up and ferment it cool. We use Cascade and Citra hops to give it a fresh, zippy finish. Great as the weather warms up. 4.5% ABV, 22BU’s”.

Re-rate. Served in to a shaker glass, this steam ale provides a pale golden appearance with a delicate white head that fades quickly and leaves  little lacing clinging to the glass. It’s offering aromas of mild tropical fruits, peach, grassy/herbal hops and grains with a bready, yeasty character. According to the bottle there is wheat malt used here although we aren’t picking much up. Flavours are quite crisp and there is mild bitterness upfront and also in the finish. It has a nice smooth texture with moderate carbonation levels in the mouth. Again citrus and tropical fruits in flavour with a firmer malt backbone that is detected through the mid. There is also a grassy component that would most probably be stemming from the use of Cascade and Citra hops. Very light, very summery and highly palatable and given it’s only 4.5% ABV it’s also extremely sessional. We love Mountain Goat but we found this was way too soft for us. On the flip side it would be a perfect summer session beer. Not bad.