“Altbier is the traditional beer of the German city Dusseldorf. A copper coloured, smooth and well-balanced ale. It is fermented at cooler temperatures than typical ales to give it a cleaner finish. Altbier is rarely seen outside of Dusseldorf, yet inside many of the city’s pubs it is the only beer served.”

Appearance: Somewhat of a blend between copper and amber with a humongous 3.5 inch head which almost erupts out of the glass. It quickly reduced and left an absolute smattering of lace in its wake.

Aroma: Yummo. It instantly reminds us of a top shelf ESB with its big bready and sweet honey and caramel overtones. Exquisitely balanced by those gorgeous Noble hops which provide herbal, spicy, citrus and floral accents and blends back into the sweet malts harmoniously. Hints of toast and fruity esters – banana and orchard fruits like apples and pear…but more caramelised. Really good depth to it.

Flavour: It comes on quite sweet i.e lots of honey, caramel and toffee but the dry and bready qualities pull it into line immediately. A delicious toasty-ness escalates around the mid and peppery spice, floral and herbal hop notes come along for the ride. It all hits a lightly roasted note late in the piece then finishes sweet yet toasty with good length on it.

“Mellow, easy, crisp, and light bodied. The name originates from it being a top-fermented brew. An older method of brewing, giving its famous fruity flavour.”

Aroma: Malt-driven, semi sweet and tangy. Old world hops start to open up pretty quickly and present their earthy, spicy and woody characters. More of the richer aromas like toffee, gingerbread and brioche are buried a bit deeper. Picking up shades of nutty malt, toast and marmalade then dark fruits and yeast esters to round it out. Really nice…reminds us of a good Vienna Lager.

Flavour: Not as well defined as the aroma but it’s unbelievably velvety and the malt profile displays everything from light toffee, nuts, dough/toast and semi sweet honey. Rather earthy and woody…hinged on a subtle dryness which shifts into the slightly tangy, yeasty and earthy finish that really hangs on.

Overall: Definitely our least favoured of the 3 we’ve tried from this series thus far. Our knowledge on Altbier is limited though so this could be exactly what the brewers were going for. Although it’s not for us it was still a decent drop. 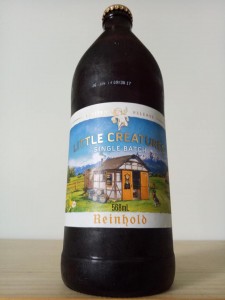 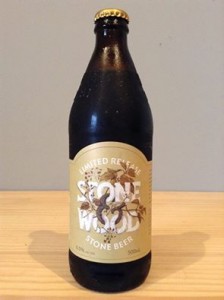 “Long before the wizardry of steam was invented, brewers used stone and wood to brew their daily beer. As a tribute to this ancient technique, we add wood fired stones to the kettle to rouse the boil, intensifying the malt characters of this seasonal brew. Using a selection of seven malts, the 2016 stone beer is a dark ale with a roasted cocoa aroma, this full bodied winter warmer is balanced with caramel sweetness, finishing dry.”

Served in a sniffer glass. The pour is very stout-like – pitch black with a stubborn two finger head that holds up well but eventually settles to a thin overlay that leaves some healthy decals as it ebbs. Lots of beautiful roasted aromas gushing out. Moreish wafts of chocolate, espresso, cocoa, roasted nuts, caramel, molasses, licorice and a hint of smoke has us completely reeling! Geez, you can’t ask for much more, this is simply brilliant. In the mouth it’s full and creamy with a subtle dryness developing toward the back end. The 6.5% ABV has been suppressed well as this super smooth dark ale just glides over the tongue. The flavour follows on from the aroma superbly – big, roasted and decadent notes of cocoa, coffee, roasted malts, ovaltine and a suggestion of smoke transition through the mid. A gentle alcohol warmth slides in and carries it all in to a dry, roasty finish with decent duration on the rear palate. We’ve been religiously reviewing Stone & Wood’s annual L/R Stone beer since 2013 and we must say each year it gets better. This would have to be the best beer we’ve ever had from this brewery, it’s packed full of dark malts, coffee and chocolate and perfectly balanced by a gentle hop bitterness. A bottle of this, a big roaring fire and a big steak. Heaven! 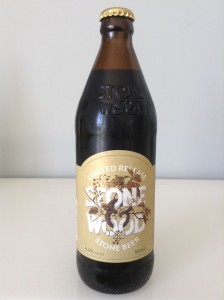 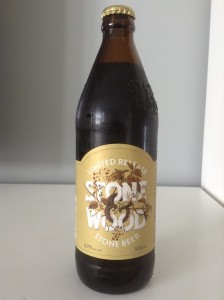 We still aren’t sure what style of brew this is. Most categorise this as a ‘stone beer’ because of the brewing process which is used, but to us it’s somewhere between a dark and a brown ale. Whatever you choose this limited release looks a treat.

Served in a tulip glass the mat black pour produced a 1 inch brown head that slowly dissipated to a rim of foam around the edge of the glass. Laced quite well considering the slowly diminishing head. Aroma is so similar to the Lord Nelsons ‘old admiral’. Beautifully caramelised with roasted coffee bean, chocolate and malt dominating the nose. Undertones of booze, cocoa and burnt wood work wonderfully together to create good depth. Mouthfeel was mineraly with mild-medium carbonation. Medium bodied. The palate displays a gorgeous array of roasted flavours with coffee and chocolate taking the front seat. A spicy addition of hops delivers an earthy finish with hints of caramelised malt and espresso. Great length. These limited release ‘stone beers’ are a huge boost to this breweries already stellar reputation, once again we’re already looking forward to next year’s offering. 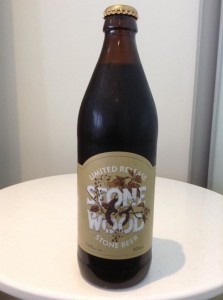 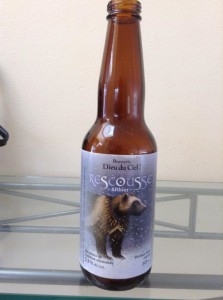 “The Rescue is a sleek Altbier that celebrates life in all its diversity. On the palate, malted attack mingles with aromas of toast, leaving a final hop that bites the tongue and gives this red ale with mahogany highlights its freshness, its complexity and uniqueness. Good Lord! pays 11 cents per bottle sold to the Foundation of the Quebec wildlife to come to the rescue of endangered species such as wolverines, copper redhorse and chorus frog … Liberty, equality, biodiversity! Get out of indifference, make your difference.”

There isn’t a bad beer these guys brew. They would easily be in our top 10 best breweries in the world and although we mention it a lot, the artwork these guys offer on their labels are second to none. Served in a beer tulip the deep copper red pour produced a thin fizzy head which retains well, releasing some webbed lace trails down the walls of the glass. Off the nose we’re picking up a delicate malt driven aroma with earthy hints of caramel, toasted sourdough, dark fruits, nutty malts and spice. Medium carbonation with a soft, rounded mouth feel. The true dieu di ciel characteristic of dark malts and nutty caramel/maple syrupy flavours marry up beautifully with the chewy dough and subtle spice to bring an absolute pearler of a beer together. Good length. 5.3% ABV plays a subtle role in the make up of the body, adding a full flavoured taste. Again, big ups to this world class brewery. Tasty beer.