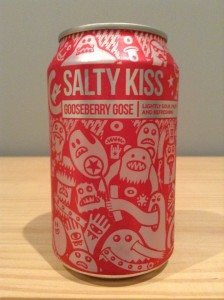 “Time for our third new beer of the year, and continuing a theme from our Bavarian Pils, ‘Dancing Bear’ we are brewing another traditional German beer style, but one which will be relatively unknown to many UK beer drinkers. When Alex Barlow from All Beer asked us if we’d like to host his friend and Danish master brewer Anders Kissmeyer at our brewery for a brew recently, we jumped at the opportunity to make new friends and learn from Ander’s experience. f you’re not familar with him, Anders has worked in brewing for many years, learning his trade at Carlsberg and after taking inspiration from the fledgling US craft beer scene going on to found one of the first modern Danish craft breweries ‘Nørrebro Bryghus’ in the early 90’s. Anders now travels the world collaborating with brewers under the name ‘Kissmeyer beer’.”

As the Gose is part of the weizen family we served it in to a weizen glass. The hazy amber pour whips up a rocky two finger head which slowly dissipates and settles to a decent overlay with some healthy lace trailing it down. Getting plenty of fruity notes on the nose initially. Gooseberry is obviously the dominant scent but there are certainly hints of citrus, passionfruit and ripened berries in support. A slight saltiness does come through, a little briney at times but it does fuse well in to the grainy wheat malt and musty yeast characters nicely. All very subtle and delicate but aromatic in its own right. The texture of the beer in the mouth is mineraly with a light and disappointingly thin body. A touch of saltiness on the lips but it’s quite weak and pedestrian. Not getting a great deal of sourness or acidity for that matter. Maybe a soft citrus tartness pairing with a sea water saltiness upfront. Although it’s not sour the palate does produce a fair bit of soapy saliva through the mid as hints of a fruity hop bitterness leads in to an ultimately short, musty finish with a subtle saltiness rounding out. Maybe we just don’t have the palate for this style but to us it’s just lackluster, watery and insipid. Other than the salty texture and feature fruit there’s nothing exciting happening. On the other hand, it’s super sessional and light in ABV (4.1%) so if that’s what you’re after then go for it. Otherwise, move on.