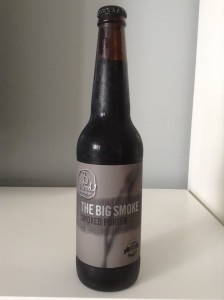 “Now what is this? A smoked beer?? It really isn’t as crazy as it sounds. 250 years ago virtually all beers were smoked (it’s true, Google it!), but with the dawning of the industrial revolution most of the smoke lifted. However, in the German town of Bamberg the flame has quite literally been kept alive and to this day the town’s brewers produce world renowned beers brewed with their own special rauchmalz (beechwood smoked malt).”

These guys are world class brewers and its reflected in this German influenced smoked porter. Served in a tulip glass the mat black pour produced a really fizzy 1 finger tanned head that collapsed quickly to a patch of foam on top. Not a great deal of lacing but some bubbly residue sticks to the glass. Aroma is as we expected…highly smoked with a presence of peat. The rauchmalz (beechwood smoked malt) which is the primary basis of the aroma is used modestly. Enough to be the dominant fragrance but enough to allow other wafts of espresso, dark chocolate, ash, phenols and charcoal to come through. Mild-medium carbonation with an oily mouthfeel. Medium bodied. Upfront the big smoky notes invade the taste buds but as it mellows off the espresso and cocoa creeps in. The mid-palate literally mirrors the fore flavour with espresso taking the front seat. Nice lingering roasted finish with a touch of ash on the back end. The addition of espresso bitterness adds extra flavour to the good length of this porter. 6.2 % ABV is bang on. Very well done, as we aren’t huge fans of smoked beers this has us ticking all the boxes.